Shopping Cart
Your Cart is Empty
Quantity:
Subtotal
Taxes
Shipping
Total
There was an error with PayPalClick here to try again

Thank you for your business!You should be receiving an order confirmation from Paypal shortly.Exit Shopping Cart

A collection of images showcasing a small sample of Simon's model making commissions and projects produced throughout his career.

August 2022 marked his 46th year as a professional model maker 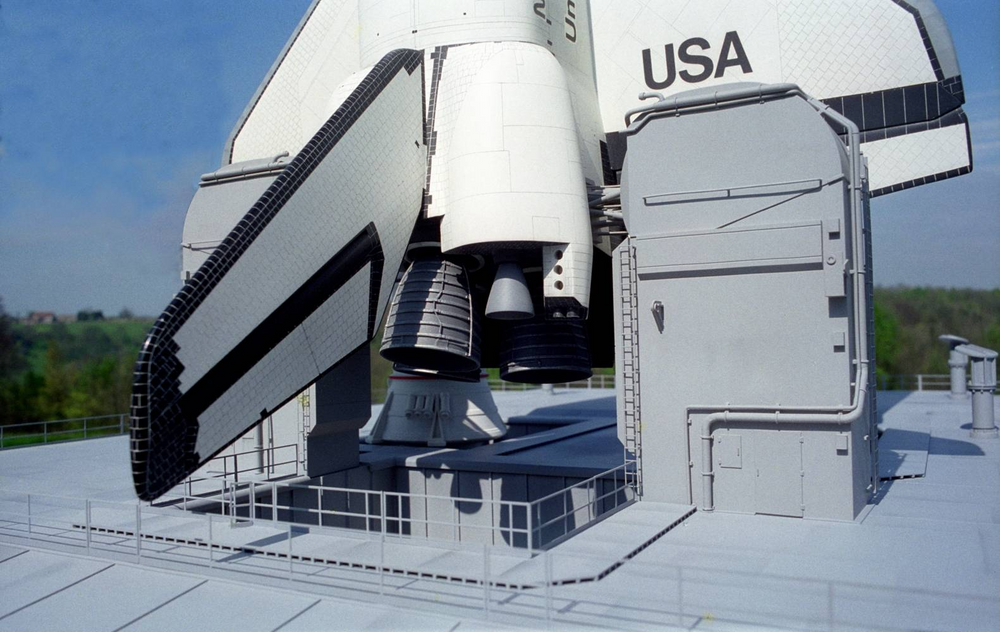 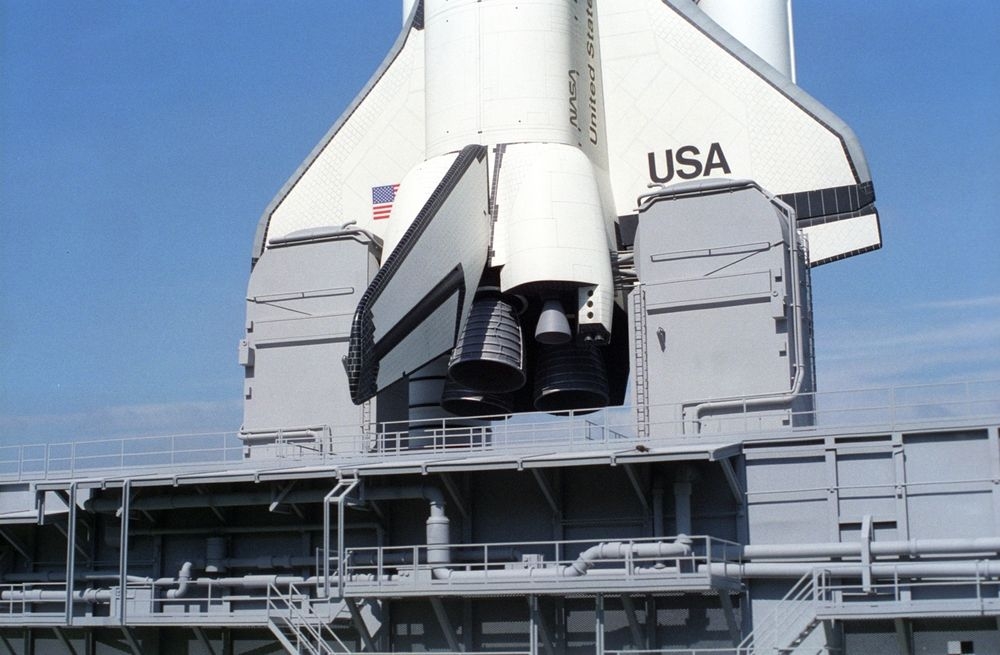 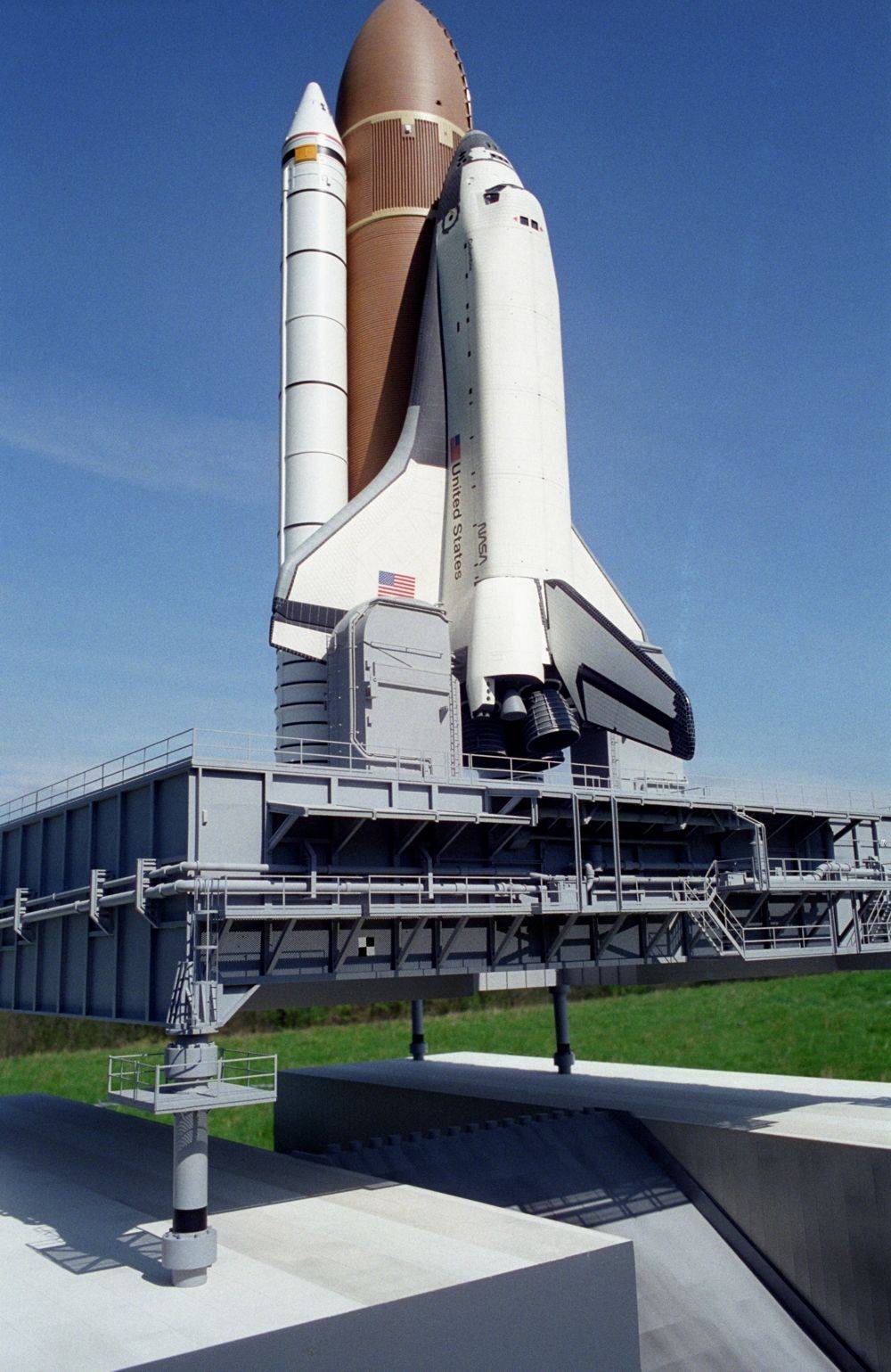 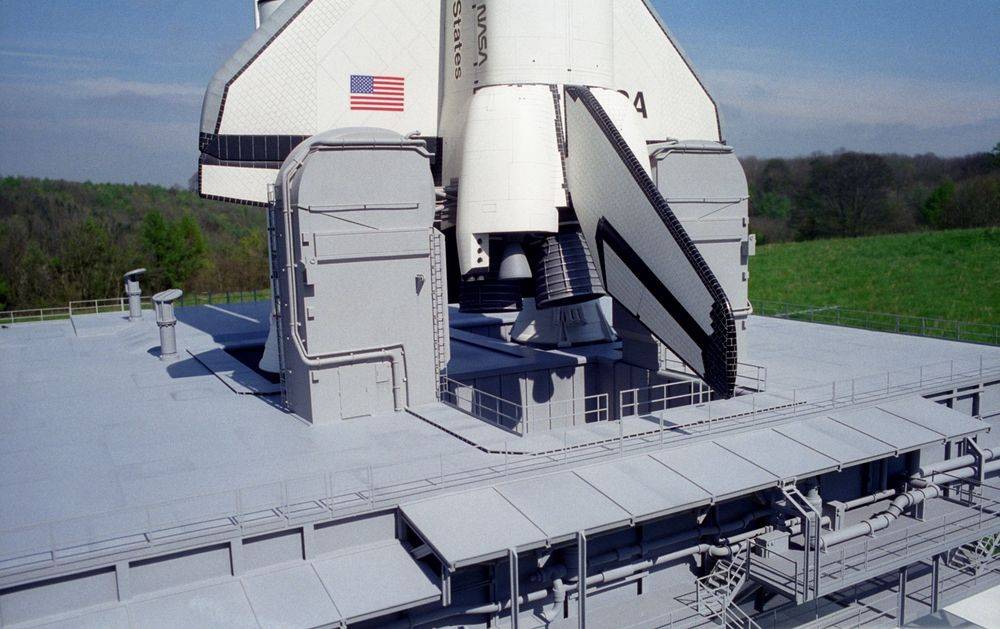 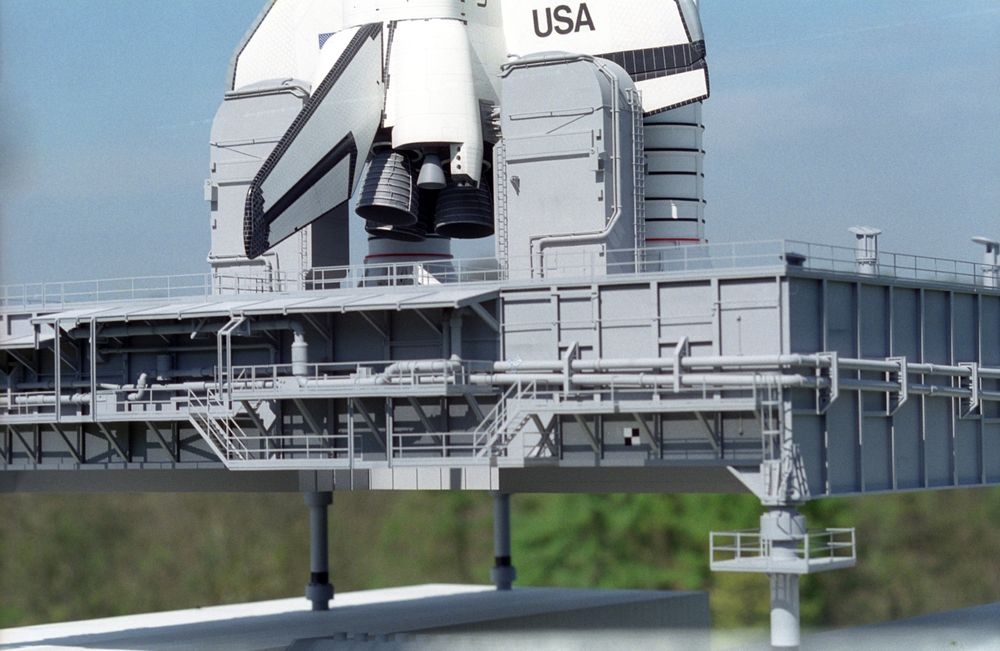 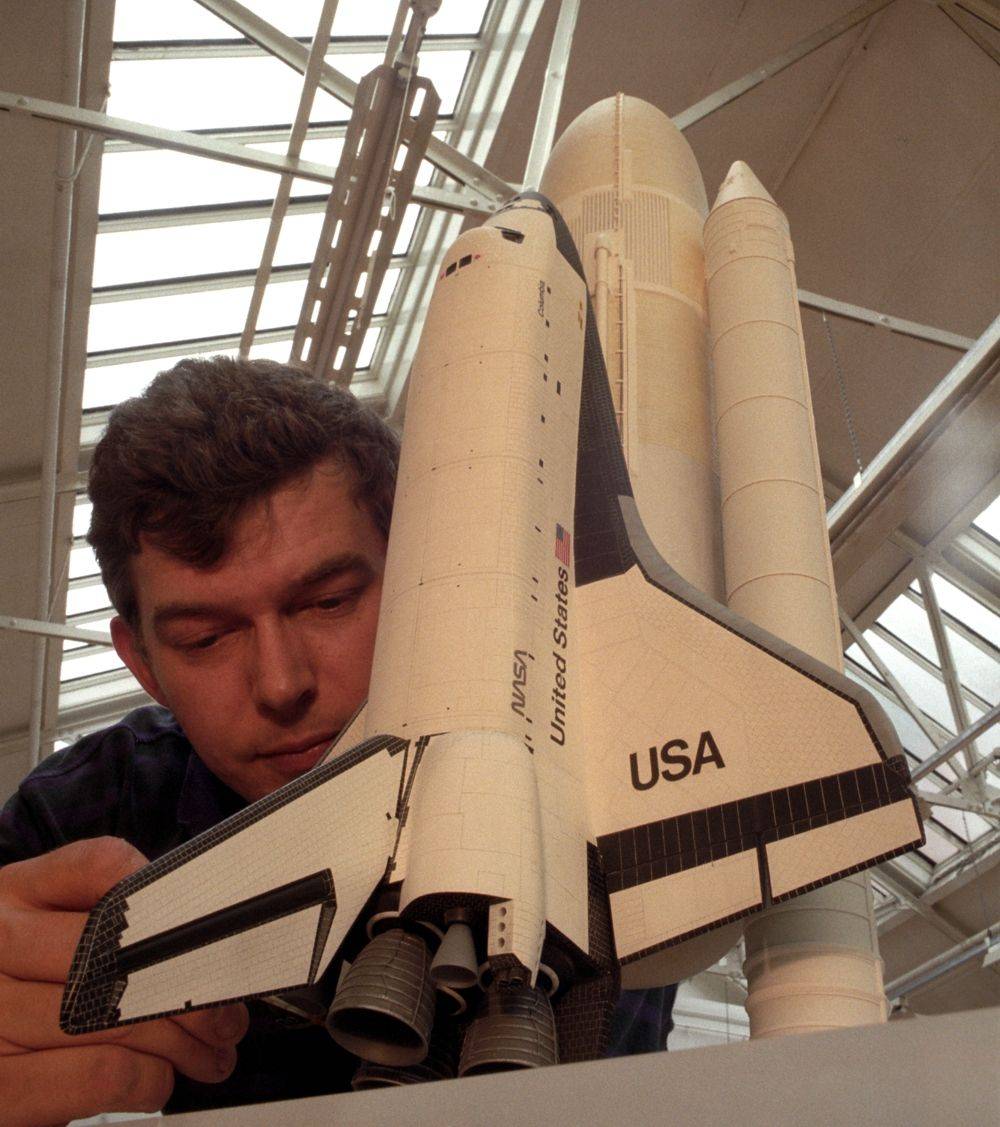 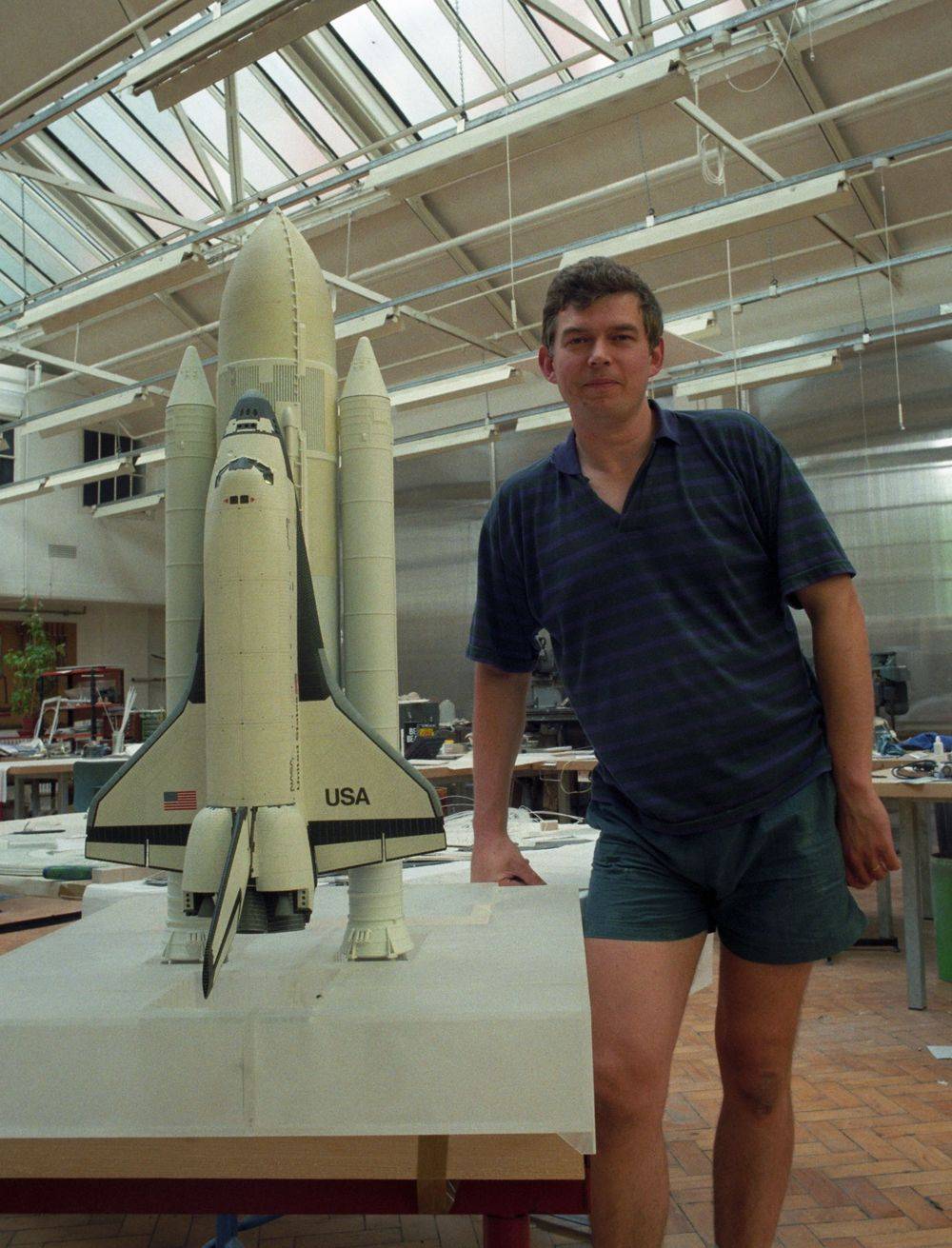 Display for the London Museum of Science And Technology.  Model constructed with the cooperation of Amalgam Modelmakers & Designers and Aspect Modelmaking (Kim Ward)

This model was commissioned as a fully detailed representation of the Space Shuttle Columbia mated to its External Tank (ET) and Solid Rocket Boosters (SRB) in launch mode on the Mobile launch platform 'Hard Down' over the flame trench at its Cape Canaveral launch site.

The Orbiter began life as a Monogram 1:72 kit but was extensively modified in order to fully replicate the detailing of the full size vehicle. It is the only 'Off the shelf' element of this display. Reworking of the kit included a new nose section, cockpit interior and windows, OMS (Orbital Manoevering system) engines and Main engines. The surface tile detailing was hand cut into the painted surface useing scalpel guided by acrylic templates.

The ET is turned from 'Tooling Board' with the surface ridged to represent the Thermal foam insulation seen on the prototype. Detailing has been added with cast resin sections and wire to represent the fine pipework with plastic tubing and other details added.

The SRB's are EMA plastic tubing with turned nose and tail sections in Tooling Board and fine styrene overlays to represent surface detailing and paneling.

Originally built for the Redifon Co this 1:50 scale model was designed to demonstrate a fully portable flight simulator set up used as training for RAF Tornado Pilots. The Central unit contains the actual simulator assembly with the surrounding units containing the various support systems.

The units are constructed from Acrylic and Styrene plastic with etched brass detailing. The Tornado model was supplied by Space Models Ltd.

Originally commission by BRAZIL Production Designer Norman Garwood and developed from his own design with considerable design input from Simon Atkinson & David Wightman.

The lower sections of the buildings were based on existing derelict buildings in London's dockland's where the location shooting of the 'Buttle' residence took place featuring actor Jonathan Price and various disgruntled residents of 'Shangri -La Towers'.

The model is seen in its original form as an stand alone architectural display outside the 'Actual' complex with a tramp looming over it - although the buildings were re positioned for the initial eye level view from Sam Lowry's (Jonathan Price) POV as he drives up to the buildings. The final shot establishes that the model represents the dream, the matte painted view of the end result showing the nightmare reality

The buildings are constructed from Styrene Plastic with the 'cooling tower' sections vacuum formed in ABS plastic. The windows are applied with reflective tape. The water surface is textured acrylic sheet back sprayed.

Both the interior model set and detail sections of the 60 foot long model of the Liparus tanker featured extensively in the movie were constructed at Space Model In Feltham, London in 1976/7

Many of the parts produced were constructed in brass and steel for durability and 'weight' during the destruction sequences where the interior set is seen exploding and the structures (walkways etc) collapsing. Much of the exterior deck detail on the tanker was also machined from brass. The ships cabin structures were built from acrylic sheet and the interior set panelling cast from fibreglass - Unfortunately much of the fine detailing on both exterior and interiors is not seen in the final film.

Originally built by Simon for the BBC space drama in 1977 the LONDON featured in the first three episodes of the series and made subsequent appearances in other programmes rederessed to represent different vehicles. The London was the brainchild of BBC SFX director Ian Scoones and Simon's model was based on a concept drawing prepared by Ian in 1976.

In 2019 Simon was reunited with the model at Mat Irvine's smallSpace event and agreed to restore what was then an extremely damaged item. The restoration is documented HERE.

The London is currently on loan to the National Film & Sci Fi Museum where it can be viewed along with the Liberator and several other Blake's 7 items - Click HERE for further details.

This model was constructed from fibreglass moulds cast from Jellutong turned masters and EMA Tubing. The front sections of the outriggers were brass with soldered detailing. The rear 'Engine' section was moulded perspex with applied tape detailing.

The original Liberator model (or the remains of) is in the collection of Mat Irvine. Two of the brass weapons assemblies were subsequently removed and formed the basis of a replica which appears from time to time on sale.

1:32 scale (Gauge 1) two London Underground cars built with interchangeable ends for an animated sequence filmed by London Transport as part of their advertising campaign to promote the extension of the Piccadilly line from Hounslow to Heathrow Airport in 1977.

A Fall of Moondust

Concept model built in 1975 based on the novel by Arthur.C.Clarke featuring the moon cruiser 'SELENE'

Although not up to today's exacting replicas it should be understood that this model was produced from minimal photographic references only as drawings could be not accessed at the time - unlike the wealth of information available to today's model makers.

The model was commissioned by the Classic Cinema group to accompany the release of The Empire Strikes back in selected West Country cinemas and was built in 3 weeks without blueprints.

Model organised as a live client project by Simon Atkinson in his capacity as course organiser and lecturer on the City of Glasgow College's HND Modelmaking For The Creative Industries Course.

The model is now on display at the Corris Railway Museum and is in use as a demonstration of their intent to build a substantial station on the site of the original which was demolished when the line originally closed in the 1940's. This major redevelopment includes the building of a new doctors surgery relocated from it's original position on the old trackbed.

The buildings were constructed from 2mm cast acrylic sheet with laser cut stone embossing etched into the surface - as were all of the retaining walls and other structures. The Station canopy is laser cut and constructed from 1mm acrylic. Track is PECO and planting and trees 4D Modelshop.

All of the talented students involved in the project graduated from the course in 2014 and are now working in different areas of the professional Modelmaking industry.

More details of this course can be found via the links page on this website.

Model commissioned to demonstrate the extensive underpinning required to stabilize the main tower of York Minster - constructed from Lime wood and clear acrylic this model can still be viewed in the undercroft of the Minster today. The model features a model of the model (stay with us here..) positioned below the tower in the position of the model display itself giving viewers an impression of the great size of the structure above them while touring the undercroft area.

Model is sadly no longer on display

This extensively detailed and illuminated model was commissioned to demonstrate the techniques and structures used to renovate the palace during an two year rebuilding operation in which the ancient stonework was integrated with modern steelwork to tie the various elements of the building safely together.

Simon designed the model and the complex sectioning of the key structural elements.

AD Modelmakers, run by Michael Dunk, are specialists in the production of museum models and displays. This model was commissioned by the Scottish National Museum in Edinburgh and continues to be displayed there today in the Japanese Gallery.

Model built from Foamex sheet scored to represent slate slab walling with Styrene plastic detailing . Posters are scaled down reproductions based on actual posters from the 1970 period of the model.

Probably one of the most detailed architectural models ever produced resulted in three sections of the tower being produced - The base levels including landscaping, The mid section with services, the top 6 floors and roof areas. Each office level featured full illumination with fibre optics fed to each lighting unit to simulate fluorescent light strips through the service towers.

A detailed landscape model of the expensive quarry facility under development by Foster Yeoman to extract and crush granite from the hillside near Fort William in Scotland.

One of a series of models produced by Aspect Modelmaking (Kim Ward & Stuart Jones) in the 1990's.

In addition Simon produced showcase models of each locomotive during this period - some of which are featured here. The Just like The Real Thing range has been acclaimed as the most accurate and detailed reproductions of the many and varied types of British locomotives.

Vacuum formed ABS casing with Acrylic and Tooling Board detailing.

A styling prototype installed in an existing tractor for a trade show at Earls Court. In an entertaining post script to this project - this tractor was subsequently sold in error following the show to a farmer who only discovered this to be a mockup when he tried to operate the tractor on his farm!

As if there weren't enough different garden chairs available on the planet already this full size protoype was ordered for a trade show a week later!

Designed and developed by a UK company for export but subsequently denied export license as it was a thoroughly unpleasant proposal. model constructed from ABS sheet featuring full interior detail, opening doors and steering mechanism for front wheels.